Congratulations to Walton junior squad alumni Morgan Bolding and Alastair Douglass on getting bronze medals in the Great Britain eight at the World u23 Championships in Plovdiv, Bulgaria. You can see their medal final here starting at 3:11. Morgan is in the 6 seat and Ali in the 2 seat.

Mat Tarrant, in the men’s coxless four, and Annie Withers, in the women’s eight, won gold and bronze medals respectively at the World Cup final held in Lucerne and both look well set for the World Championships which will be held in Florida at the end of September.

Also to Adam Giambrone and sister Nina, pictured below with their medals, both represented Nottingham University in the Great Britain team for the European Universities Regatta in Subotica, Serbia. Adam took gold in the men’s lightweight pair, and Nina took silver in the women’s lightweight quad. 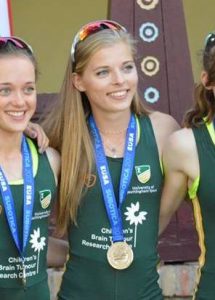